Complex sites often require a combination of technologies for complete remediation. At heavily contaminated sites, in situ thermal treatment may be used to treat the source, while other technologies are used in the transition and plume zones. The three major in situ thermal remediation (ISTR) technologies are Steam Enhanced Extraction (SEE), Electrical Resistance Heating (ERH), and Thermal Conduction Heating (TCH). These technologies can be combined with in situ chemical oxidation, in situ chemical reduction, bioremediation, permeable reactive barriers, and monitored natural attenuation to provide complete site solutions. They may be enhanced using hydraulic or pneumatic fracturing and emplacement of permeable materials.

Figure 1. Conceptual model of a complex site with multiple zones with different levels of contamination.

Most complex sites can be divided into three zones (Figure 1):

For successful remediation, it is crucial that every site is well understood and that a good site conceptual model (CSM) is developed. A good CSM is the basis for selecting remedial technologies that are effective in each of the zones. In source zones, technologies must often be effective both above and below the water table. The specific physical characteristics of the contaminants of concern and of the soils must also be considered in selecting the optimal remedy[2]. Several commonly applied technologies for the three different zones are shown in Table 1.

These technologies must be combined based on site-specific characteristics, remedial objectives, and the capabilities of each technology. One example of a combined remedy is when thermal treatment is used to reduce the source concentration/mass, and a set of permeable reactive barriers are used to control and remediate the plume in the years following thermal treatment (Figure 2). Another example is thermal treatment of the source zone combined with bioremediation of the transition zone and dissolved plume (Figure 3). 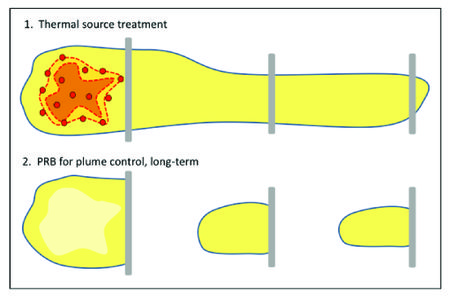 Recent examples of combined remedies with a thermal component include:

Thermal technologies can be coupled with less intensive solutions to provide integrated solutions for complex sites. By treating the source zones thermally, most of the chemical mass may be removed. This facilitates treating the transition zone and the plume effectively. Thermal treatment is most often combined with soil vapor extraction and enhanced bioremediation, but site-specific analyses must be used to determine the best options for each site.