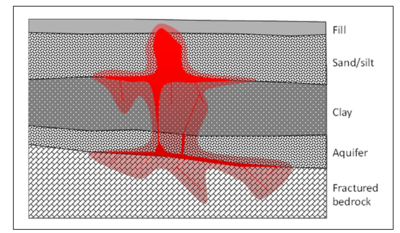 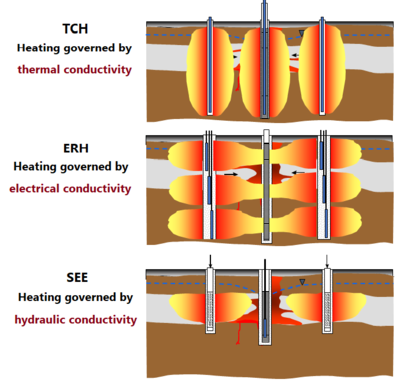 ISTR is typically used for source zones where conventional and less costly methods such as in situ chemical oxidation and enhanced bioremediation are not effective[1][2][3]. For example, ISTR might be applied to a contaminated site where non-aqueous phase liquid (NAPL) has migrated to significant depth and constitutes a source zone (Figure 1).

Most in situ thermal technologies were originally developed and applied by the oil industry to enhance oil recovery. The most widely-used technologies are listed below (Figure 2):

Other less commonly used ISTR technologies are hot water injection, radio-frequency heating, and micro-wave heating. For some sites with very high concentrations of hydrocarbons, smoldering may be used to degrade the contamination in place.

There are several major applications and strengths of each of the three main ISTR technologies (Table 1). The major difference between the technologies is that TCH can be used to heat dry soils and to treat semi-volatile organic compounds (SVOCs), whereas ERH and SEE is limited by the presence of water or soil moisture, and therefore can be used to reach the boiling point of water. This limits these technologies to targeting volatile organic compounds (VOCs) and to partially treat SVOCs, since temperatures are not high enough to volatilize and completely remove chemicals such as dioxins, polychlorinated biphenyls (PCBs) or PFAS.

In general terms, ERH has been used primarily for VOC source zones, where achievement of the boiling point of water is sufficient to remediate volatile contaminants. When applicable, ERH tends to be more energy efficient than TCH and allows for faster heat-up rates TCH. SEE is used in permeable formations and can overcome cooling by groundwater flow. TCH is used in the same settings as ERH, plus at sites where treatment of less volatile contaminants of concern (COCs), such as SVOCs, is required. SEE is readily combined with other ISTR technologies for complex sites with both low permeability zones and significant groundwater flow.

Mechanisms – How are Contaminants of Concern (COCs) Removed?

For volatile contaminants like chlorinated solvents, vaporization is the dominant mechanism for remediation. The vapor pressure and Henry's Law constant for trichloroethylene (TCE) and perchloroethylene (PCE) increase with temperature, leading to chemical vaporization once heated (Figure 3). 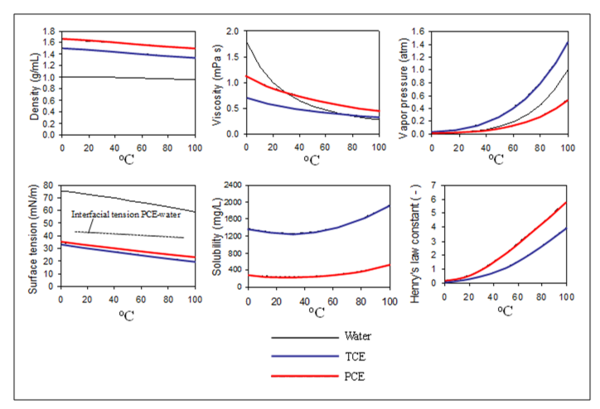 Figure 3. Properties of PCE, TCE, and water as a function of temperature[7]. Changes in PCE and TCE properties with increased temperature facilitate contaminant recovery as a vapor.

For oils, tars, creosote and semi-volatile chemicals, viscosity reduction to enable liquid recovery may also be an important mechanism. These fluids can then be removed by multi-phase extraction. The heating can be done with any of the three major ISTR methods. For complete removal of these less volatile chemicals, the subsurface needs to be heated to temperatures above the boiling point of water (typically between 200° and 335°C). This can only be accomplished using TCH[6].

Since the goal of ISTR is to make chemicals of concern more mobile either in liquid or vapor form, subsequent extraction and capture of those COCs is essential. A site-specific analysis should determine the strategy for extraction. Because of the increased mobility of the COCs, hydraulic control must be maintained either by the use of barriers, or more often by extracting more fluids than injected for heating. Inward hydraulic gradients must be demonstrated and maintained during the heating period. Pneumatic control should be maintained by using tight vapor covers and by extracting sufficient quantities of air and steam to create a vacuum in the unsaturated part of the treatment zone.

During thermal operation, monitoring and sampling efforts are used to document progress[8] as follows:

Before completion of ISTR, confirmatory sampling of soil and groundwater is performed to document that the remedial goals have been met. Tested methods for hot sampling exist[9].

At many sites, in situ thermal technologies have provided an answer to a major challenge: how to treat heavily contaminated source zones to meet low concentration standards. The three dominant methods (SEE, ERH, TCH) have now been used at more than 300 sites. When site conditions are well understood, and the thermal system properly implemented, remediation goals have generally been met. These technologies are no longer considered innovative, and properly designed systems achieve predictable reductions in COCs.