Climate change in the present context refers to the changes in climate that have already occurred, are ongoing, and can be projected from the recent past (post-industrialization, circa 1850) to forecast the near future. Average global near-surface air temperature and global mean sea level have steadily increased over the past 100 years. A Swedish Chemist, Svante Arrhenius in 1896 first predicted from basic physical chemical principles that increasing the amount of CO2 in the atmosphere would lead to an increase in the average surface temperature on earth[1]. Now known as the greenhouse effect, this correlation between atmospheric CO2 and surface temperature was subsequently established using a large number of observational studies and numerical models during the past 100 years[2]. The numerical models representing the energy balance of the earth, known as global climate models, or earth system models when they are also used to simulate the carbon cycle, have improved with time to represent phenomena observed in the atmosphere, oceans and land. Projections of climate change are then generated using these models along with estimates of greenhouse gas (GHG) levels in the atmosphere for a variety of scenarios (fossil-fuel use, changes to alternative energy sources, etc.). Under scenario RCP8.5 (business as usual) average global temperature is projected to rise ~ 4°C, and global mean sea level is projected to rise 0.6 to 0.8 meters by the year 2100. 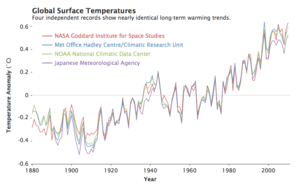 Climate change in the present context refers to the changes in climate that have already occurred, are ongoing, and can be projected from the recent past (post-industrialization, circa 1850) to forecast the near future. The earth has enjoyed a relatively stable climate for the past 10,000 years, from the beginning of a geological epoch known as the Holocene which started at the end of the last glacial period. However, the earth’s global average near-surface air temperature has seen a steady increase over the past 100 years (Figure 1) and is projected to continue to increase over the rest of the century.

Figure 1 shows global surface temperature anomalies for the past 100+ years as compared to the baseline of average temperature for the years 1961-1990. Each of the lines shown in Figure 1 is the temperature anomaly calculated using independent methods and datasets by the organizations listed in the figure. The climate system is complex, and there are many phenomena that cause the mean temperature to fluctuate over various time scales from annual to decadal as seen in the figure. Short to medium time scale changes are natural to the system, but the observed overarching increase is a trend spanning the longer time scale of the past 100 years. 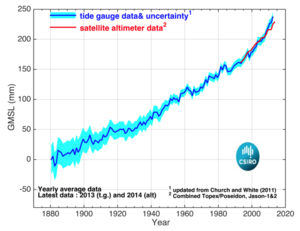 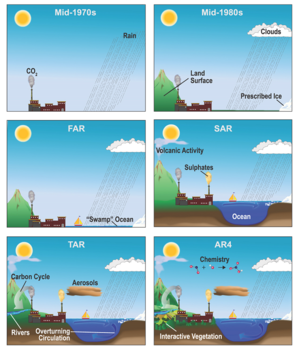 A warming climate is expected to increase the sea level elevation across the planet. This change is expected to occur due to both thermal expansion of water (higher temperatures lead to expansion and cooler temperatures to contraction) and also the melting of ice sheets and glaciers. Figure 2 shows estimates of global mean sea-level (GMSL) rise calculated using data collected from tide gauges around the world. Starting in 1993, satellite telemetry data has been used as an additional data source for generating these estimates. An increase of 250mm (9.8 inches) since 1880 is estimated to have already occurred by 2019.

The first global climate models were developed in the 1970s and were primarily focused on understanding the water and energy budget of the planet and the effects of greenhouse gases. Over the decades, these models have been modified and improved to represent phenomena in the atmosphere, oceans and land and are usually referred to as earth system models. Figure 3 illustrates the evolution of earth system models over the past 50 years. As described in the first IPCC assessment report (FAR)[6], these early models were primarily atmospheric with ocean surface represented in the models as a pool of water that exchanges moisture with the atmosphere (i.e. a swamp). By the second IPCC assessment report (SAR)[7], the models included oceans represented as slabs of water, sulfate aerosols (which are formed both from industrial and from volcanic activity), and also greenhouse gases. Sulfate aerosols cool the atmosphere and are important for calculating the energy budget of the atmosphere correctly. The third assessment report (TAR)[8] included dynamic oceans with overturning currents, surface hydrological phenomena (such as rivers), carbon cycle participants and various kinds of atmospheric aerosols in addition to sulfate. The fourth assessment report (AR4)[9] models had a full complement of atmospheric chemistry, aerosols, dynamic vegetation, dynamic oceans, carbon cycle and atmosphere, and can be considered full earth system models, distinct from the simpler climate models of the past. These models keep evolving with more and finer details added to the various earth compartments (land, ocean and biosphere) and higher spatial resolution. The Climate/Earth System models under development have spatial resolutions ranging from 25km to 100km. 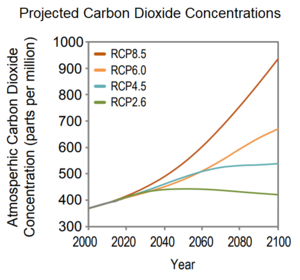 Figure 4: Projected concentration of CO2 through the year 2100 for each RCP used in IPCC AR-5 assessment. Adapted from USGCRP 2017[10]. 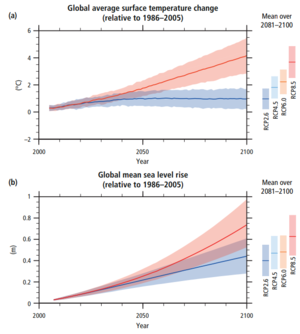 Climate change projections depend on the amount of carbon dioxide (CO2) and other greenhouse gases (GHG) in the atmosphere. However, the amount of GHG released depends on a wide variety of socio-economic factors including population growth, economic activity, the amount and type of fossil-fuels used, and how humans respond to changing climate. This human dimension adds the largest uncertainty to the projections of future climate change.

To account for the uncertainty in human activity, scientists have developed a variety of scenarios which result in Representative Concentration Pathways (RCP) for GHG, ranging from highly attenuated carbon emission scenarios to business as usual. Figure 4 shows the amount of CO2 over time for the four most widely used RCP Scenarios (RCPS). The number at the end of the RCP (e.g. RCP8.5) represents the warming in Watts per square meter (W/m2) averaged across the planet at the end of this century. For RCP8.5, CO2 concentrations are projected to more than double by 2100. Aerosols, micron sized particles in the atmosphere often formed by fossil fuel use, also play a key role in the earth’s energy balance. It is expected that if emission control strategies for GHGs are adopted, the amount of these particles will also decrease in the future. Changing the ways land is used and the ensuing changes in land cover, for example from forest to agriculture, are other significant human drivers of climate change. Deforestation of the tropical regions, conversion of more land to agriculture, and urbanization are all expected to increase through the end of the century under most of the scenarios. 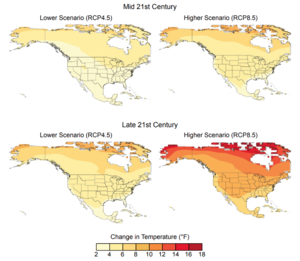 Figure 6: Projected near surface air temperature changes over North America under various emission scenarios for the middle and the end of the 21st century[10].

In addition to uncertainty about greenhouse gas (GHG) emissions, climate model projections have uncertainties related to the representation of physical, chemical and biological phenomena in the models. Some of these processes are either not well understood or occur at spatial and time scales that are not well resolved by the current generation of climate models. This type of uncertainty is referred to as model uncertainty. With increasing model sophistication and computational power, this model uncertainty is expected to decrease over time[11]. Climate models handle uncertainties in how the underlying physical, chemical and biological processes are represented in the model by using a range of input parameters and noting the range of output values that result. The Coupled Model Intercomparison Project (CMIP) conducted such calculations using a standard experimental design and model criteria selected by a group of experts. The model output was compared to output from other models, and has been archived for further analysis by the worldwide scientific community[12]. The next version of this data collection and analysis effort, CMIP6, is currently underway[13].

The Inter-governmental Panel on Climate Change (IPCC) has developed climate projections for each of the RCP scenarios discussed above[4]. Figure 5 shows projected global average near-surface air temperature and mean sea level rise for the years 2000 to 2100. Each color represents the projections based on a particular greenhouse gas emission scenario. The shading represents the range in model projections associated with different models and with the ways the underlying physical, chemical and biological processes are represented in these models. An average global temperature rise of approximately of 4°C is projected under RCP8.5[14][4][5]. Global mean sea level is projected to rise 0.6 to 0.8m by the year 2100. Other projections of sea-level rise estimate a range of 0.2 to 2m by 2100[15]. Recent observations of faster than predicted melting rates of ice sheets suggest that sea-level rise at the higher end of these estimates is more likely[16].

The most recent inter-agency sponsored assessment of national climate change[10][3] for the U.S. has developed a detailed analysis of expected climate change (Figure 6). The main conclusions are that temperature increased by nearly 1°C over the contiguous United States (CONUS) over the past century, and that temperature increases are projected over most of the country in the coming decades. Lower precipitation over the southwest and an increased number of dry days between rain events over much of the country are projected. The models predict bigger changes in temperature and precipitation in Alaska compared to CONUS. Extremes in precipitation and temperature have increased and are expected to continue this trend over the next several decades. Impacts from changing climate to infrastructure[17][4], transportation[18], and public health[19] have also been identified.