The firing and detonation of munitions will result in the deposition of unreacted energetic compounds. These materials, in sufficient concentrations, can be harmful to the environment and human health. The mass of energetics residue also indicates the efficiency of the activity, be it firing or detonation of the round, or the disposal of propellants or unexploded ordnance. Quantifying energetics deposition is the basis for fate and transport analysis and modeling, range sustainment capabilities, and determining the toxicological impacts of munitions compounds.

Live-fire military training is an integral part of combat readiness. During this training, energetic materials such as explosives, propellants, and pyrotechnics are expended. Research conducted at the US Army’s Cold Regions Research and Engineering Laboratory (CRREL) has demonstrated that during training activities, some energetic material always remains[2][3][4]. These materials can migrate to groundwater and possibly off range, jeopardizing human health and the sustainability of our military’s range assets. Very large environmental liabilities can be incurred because of energetics contamination ranges, such as has occurred at the Eagle River Flats impact area on the former Ft. Richardson, AK, and the Massachusetts Military Reservation on Cape Cod, MA[5][6].

Deposition can occur during any one or more of the following range training activities: Firing the munition, detonation, disposal of a malfunctioned munition, and disposal of excess propellant charges (referred to as a “blow-in-place” [BIP] operation; Fig. 1). Propellants, explosive loads, and pyrotechnic loads or tracers all contain energetic materials that can be recovered following a training activity. 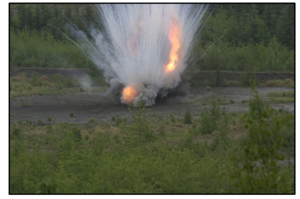 The efficiency of a detonation will have a major influence on the environmental impact of that munition on a training range. Detonation efficiency can be characterized in several manners. Commonly used methods include measuring the shock (blast) wave intensity, measuring the fragmentation size and pattern, and estimating energetic residues from detonation combustion products. A new approach is to use detonation residues deposition mass estimates to directly determine environmental impact.

Mass deposition refers to the mass of energetics remaining after an operation involving munitions is completed. These energetic residues are measured on the surface of ranges or in surface and groundwater[7][8]. The residues mass may be measured as estimated total mass remaining, as a percentage of the original mass of energetics involved in that operation for the munition, or as a soil concentration. Soil concentrations were originally examined, but it was not possible to parse out the sources of the residues or the contribution a specific munition or munition type had on the overall deposition.

The need to detect very small masses of energetics led to testing of munitions on a clean, uncontaminated surface, snow or ice, which allows for quantification of energetics residues on a per-round basis without interference from past training activities. The ability to develop an energetics residue mass estimate for a single round enabled the determination of the efficiency of a round with respect to specific operations, such as firing, detonation, or disposal. Refinement, and in some cases development, of analytical methods for propellants and explosives enabled the breakdown of efficiencies into those for individual energetic compounds within formulations. This gives a more detailed indication of where problems may occur during training as well as which operations or munitions will have less impacts on ranges and thus enable sustainable range operations.

Mass deposition measurements of munitions detonations first occurred in response to the closure of the Eagle River Flats (ERF) impact area on Fort Richardson in Alaska[9]. Howitzer rounds were fired into the Flats in winter to try to determine if explosives or white phosphorus could be detected in the residues deposited on the snow surface[10]. A sampling process was developed for residues on snow, but sampling bias and cross-contamination from prior range activities proved problematic until testing was moved to an impact area underlain by ice in 2002 (Fig. 2)[11]. In 2004, winter tests conducted on snow-covered ice at the ERF impact area demonstrated that estimates of per-round energetic residues can be obtained using the recently developed, multi-increment sampling protocol[12]. All detonation tests have since been conducted using a variation of this method[13]. The method is constantly refined, with several quality assurance procedures incorporated, as well as streamlining of the initial sample processing and reduction of cross contamination of samples in the field and the lab.

Results for 20 years of detonation testing have been compiled into a database. Munitions tested include howitzer, tank, and mortar rounds, hand and rifle grenades, demolitions materials, mines, and rockets. Tests include live-fire, blow-in-place (BIP), simulated and actual low-order detonations, and close-proximity detonation testing. Testing of newly developed insensitive munitions is now being conducted using command detonations of the rounds rather than firing them into the impact area as the rounds are in the process of certification. An excerpt from the database is shown in Table 1. The full database is much more detailed but confidential, with data on each energetic component in the explosive formulation.

The same methods used for collecting post-detonation residues have been applied to sampling for propellants at firing positions. For firing positions, the area does not need to be underlain by ice. Snow cover is sufficient (Fig. 3). The mass of propellant residues resulting from firing most weapon systems is quite low, so multiple rounds (up to 200) are fired from a single firing position to obtain sufficient residues to derive an estimate of residues per round. Some direct-fire weapon systems, such as tanks, will severely agitate the snow surface in front of the gun. In these cases, snow samples will need to be taken at several depths to recover the residues. An excerpt from the firing point residues database is shown in Table 2.

The detonation efficiency of munitions has historically been assessed using fragmentation characteristics such as size, shape, velocity, and scatter pattern. The magnitude of the shock or impulse generated by the detonation is also a means for characterizing a detonation. For the Life Cycle Environmental Assessment (LCEA), gaseous byproducts of the detonation are measured to determine consumption of the energetic load. Qualitative characterizations of detonations are also based on a visual assessment of the physical condition of the round following detonation.

The ability to quantify the mass of energetics that is consumed during a munitions-based activity allows a new assessment method for the efficiency of that activity. We now know how efficient a detonation or firing activity is in consuming the energetic load because we can measure energetics residues. A valuable assessment can be made of the effectiveness of a particular formulation of energetic materials for a specific operation in conjunction with the visual inspection of the munition or propellant remains. Assessment criteria developed by the US Army CRREL characterizes detonation efficiency based on the percent of energetic residues remaining after detonation (Table 3). We can thus standardize a system of detonation characterization based on the consistently measureable residue masses.

Most munitions tested perform quite well, with detonation efficiencies well within the high-order consumption range (>99.99%) and propellant consumption >95%. There are problems with both anti-tank rockets, with efficiencies <30% in some cases, and the new insensitive munitions, which have energetic compounds in the explosive formulations with 70-80% efficiencies (Table 4).

Major sources for range contaminants are low-order detonations and improper BIP operations that lead to inefficient detonations of the target round. The high mass and large particles resulting from low-order detonations will result in a readily available source of energetics in a localized area. These residues are subject to environmental factors such as dissolution, which may result in large contaminant plumes that attenuate slowly. Tests with insensitive munitions have shown a >98% dissolution of components such as ammonium perchlorate (AP), nitroguanidine (NQ), and nitrotriazolone (NTO) from the residues while melting and filtering snow samples. Research on particle characterization from low-order detonations and outdoor dissolution of explosive residues suggests that AP, NTO, and 2,4-Dinitroanisole (DNAN) will readily dissolve out of the fine particles (<2 mm) characteristic of post-detonation residues of multi-compound explosive formulations such as the Picatinny Arsenal Explosive (PAX) and Insensitive Munitions Explosive (IMX) families of insensitive explosives[24][25][26][27]. 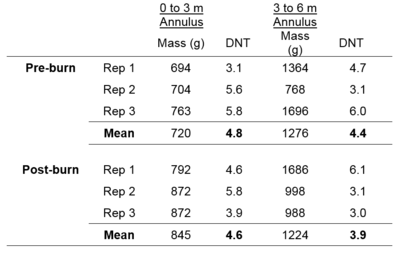 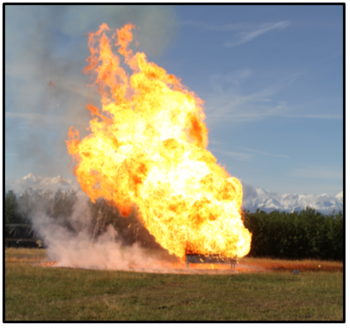 Range characterization is the assessment of contamination levels within a specified area within a range. Here, we only use it with respect to its use in assessing energetics deposition. Most range characterization conducted by CRREL for SERDP, ESTCP, and other organizations was conducted on firing points, impact ranges, and demolitions training ranges. For this research, soil samples were collected within demarcated areas (Decision Units) using the multi-increment sampling method. Samples were processed in accordance with EPA Method 8330B and analyzed for energetics[28][29]. Data are typically compared to a) either pre-activity data to determine if an event has had a short-term impact on range contaminant levels, or b) with past data to determine if contaminants are accumulating or attenuating through natural processes such as biodegradation or photodegradation.

An example short-term study of mass deposition using range characterization methods is the deposition of energetics from burning excess propellants following a howitzer training exercise[4][30]. Excess propellant charges were collected by the troops after several days of training and brought to a portable propellant burn pan at one of the firing points for training on propellant burns. The soil around the burn pan was sampled in two 3-m annular rings using multi-increment sampling methods (MIS) developed by CRREL. Following the burning of over 450 kg of propellant charges, the soil was once again sampled. All samples were returned to the analytical chemistry lab at CRREL, processed, and analyzed for 2,4-dinitrotoluene (DNT), the energetic compound in the artillery propellant formulation. No significant difference in DNT soil concentrations was found between the pre- and post-burn samples, indicating that the propellant was burned properly and efficiently within the pan[31] (Table 5, Fig. 4).

A long-term study is being conducted at Donnelly Training Area (DTA) in Alaska to determine if continued training on a fixed set of ranges is having a cumulative effect on energetics concentrations in the surface soils (Fig. 5)[32]. Data indicate that the long-term effect on surface soils of training at firing points is non-cumulative, with surface concentrations of the energetics DNT and nitroglycerine (NG) varying little from year to year. The US Army Alaska and the Bureau of Land Management are using data from this ongoing study to manage the ranges for sustainable operations at DTA.

Training with munitions will result in range contamination, with possible threats to human health, the environment, and range sustainability. Mass deposition data can assist range models, LCEA determinations, and range management plans, as it is critical to understanding the impact of the use of munitions during training. Knowing which activities, munitions, and energetic formulations will have a low environmental impact and which are problematic can guide both research and operational efforts, saving both range assets and R&D resources. The SERDP / ESTCP research into energetics deposition has led to a reassessment of the LCEA process, reclassification of PAX-21 munitions, redesign studies of the AT-4 anti-tank weapon system, and changes in the Best Management Practices on Army National Guard training ranges.