Monitored natural attenuation (MNA) can manage metals and metalloid contaminants (“metals”) at some sites, if the contaminants can be safely held in place on aquifer materials by sorption and/or precipitation processes. The degree and permanence of precipitation and adsorption can be evaluated using the concept of geochemical gradients, where key aquifer properties such as pH, redox potential, and ionic strength are different within the plume and can change over time as the plume moves through the subsurface. The U.S. Environmental Protection Agency (EPA) developed an extensive three-volume guidance document and a directive that can be used to determine if MNA can be applied at a site with metal contaminants in groundwater[1][2][3][4]. Using technical aspects of this guidance document as a foundation, we also overview a 'scenarios approach', developed by the U.S. Department of Energy for evaluating MNA for metals in groundwater, that shows the mobility chart for a number of metals for six different geochemical scenarios[5].

Monitored natural attenuation (MNA) of metal and metalloid contaminants in groundwater is a remediation strategy that relies on natural processes occurring in an aquifer that minimize risk to human health and the environment by attenuating contaminant migration from their source to a compliance point such as a drinking water well or property boundary. With the exception of short-lived radionuclides, metals and metalloids are not destroyed by natural attenuation processes and will remain sequestered in the aquifer when sufficiently attenuated. Therefore, gaining acceptance of MNA as a remedy for metal and metalloid contamination requires demonstrating, to an acceptable degree of uncertainty, that the contaminants will remain in place and pose a minimal risk for decades to centuries, depending on the contaminant.

Attenuation of Metals and Metalloids

Natural attenuation processes of metals and metalloids that occur in aquifers are adsorption, precipitation, radioactive decay, and dispersion. Adsorption and precipitation limit the mobility of metals and metalloids by causing them to partition from groundwater to solid phases. Dispersion dilutes the concentration of contaminants, rather than limiting their mobility. Radioactive decay applies to only those radionuclides that have short enough half-lives to prevent their migration to compliance points. “Short enough” varies with the contamination scenario. Radioactive decay may be sufficient to achieve successful MNA if the groundwater travel time to the compliance point is much longer than the half-life of the radionuclide. 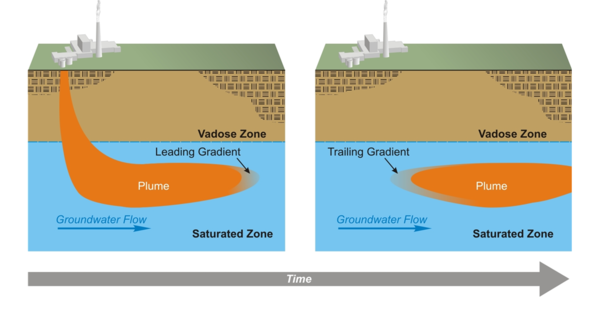 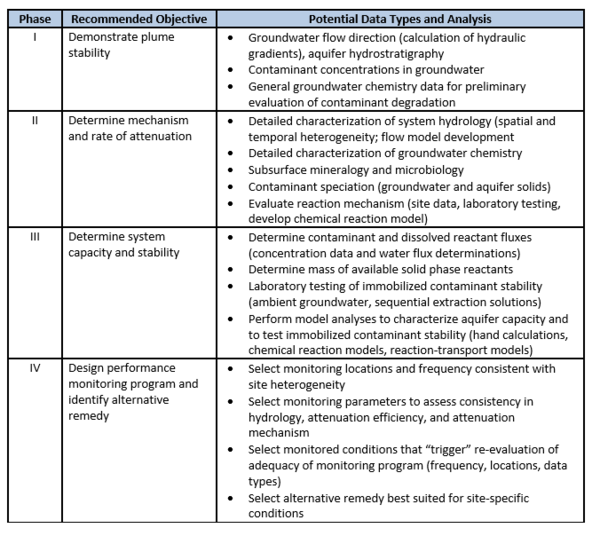 The rate of the reactions and the supply of reactants in the aquifer at the leading gradient of a contamination plume influence the rate at which the contamination plume moves. The supply of reactants includes the concentration of reactive minerals and the concentration of available adsorption sites and is called the aquifer attenuation capacity. Once the source of contamination has been eliminated, the migration rate of the leading edge or gradient of the contaminant plume will be zero or near zero if rates of adsorption or precipitation are fast relative to groundwater flow and attenuation capacity is sufficient to react with all the contamination in the aquifer[2][5][8]. These conditions are necessary for MNA to be a viable remedy for metal and metalloid contaminants.

MNA as a Remedy Guidance

The use of MNA for inorganic contaminants is predicated on two conditions:

Furthermore, the published guidance for use of MNA for inorganic contaminants[1] discourages the use of dispersion as a primary attenuation mechanism as follows: “…dilution and dispersion generally are not appropriate as primary MNA mechanisms because they reduce concentrations through dispersal of contaminant mass rather than destruction or immobilization of contaminant mass.”

Throughout these documents, it is repeatedly emphasized that MNA is not a “do nothing” remedy. This is certainly the case, given the burden of proof required to successfully demonstrate MNA as a viable remedy for metal and metalloid contamination.

The Scenarios Approach to Attenuation-Based Remedies 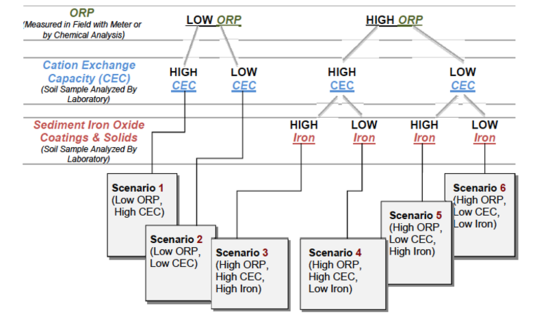 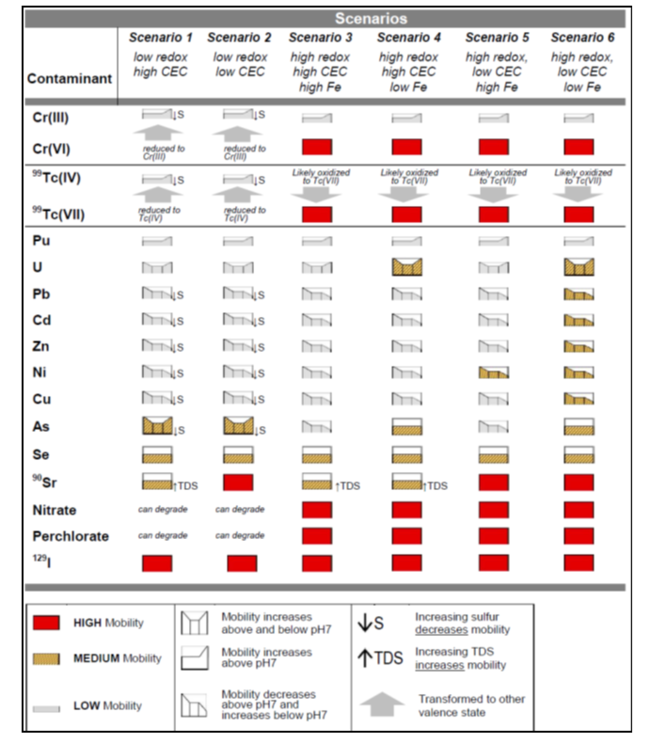 Table 2. Summary of inorganic contaminant mobility for 4 < pH < 9 for six scenarios[5].
Figure 3. The Scenarios Approach for MNA of Inorganics and Radionuclides.

In 2011, the U.S. Department of Energy published the “Scenarios Approach to Attenuation‐Based Remedies for Inorganic and Radionuclide Contaminants”[5] to serve as a technical resource to guide waste site owners, regulators, stakeholders, or other interested parties through the process of evaluating attenuation-based remedies for sites contaminated with inorganic or radionuclide contaminants. A structured approach is provided where:

"The scenarios approach exploits important traits that waste sites may have in common that allow them to be grouped into six categories or scenarios. The common traits of each scenario are parameters or characteristics that are important to attenuation of inorganic and radionuclide contaminants. A single waste site may host multiple scenarios, each occurring in different segments of a contaminant plume or predicted to occur at different points in time during the evolution of the waste site[5]."

There are six scenarios that are a function of three primary factors: oxidation/reduction potential (ORP); cation exchange capacity (CEC), and sediment iron oxide coatings and solids (Fig. 2). There are three primary factors and three secondary factors (pH, sulfur/sulfide, and total dissolved solids) that combine with the six scenarios to provide a semi-quantitative indicator of mobility (i.e., low mobility is defined as a retardation factor of 1000+) (Table 2). The Scenarios Approach for MNA of Inorganics and Radionuclides is explained in more detail in the video shown in Figure 3.