Metals and Metalloids - Mobility in Groundwater

A discussion of reactions responsible for aqueous speciation, adsorption, and precipitation requires a brief discussion of equilibrium constants[8] and activity. Any reaction:

where w, x, y, and z are coefficients of the reaction stoichiometry and A, B, C, and D are chemical constituents, has an equilibrium constant that defines whether the reaction will tend to proceed to the right, to the left, or not at all. The important metric is this ratio:

Single, or free, dissolved ions of metals and metalloids can combine with other dissolved ions to form different dissolved species, called aqueous complexes, with chemical properties different from the original ions. Metal contaminants form aqueous complexes with ions that are relatively abundant in groundwater. For example, the dissolved mercury ion Hg+2 readily combines with the chloride ion under mildly acidic conditions by the reaction:

This reaction has an association, or equilibrium, constant that governs the proportions of Hg+2, Cl- and HgCl2o that can exist in solution at equilibrium. Mercury can form many other aqueous complexes and its distribution among these aqueous complexes is known as the aqueous speciation of mercury. Furthermore, aqueous speciation can change as conditions in the groundwater change. For example, let’s investigate the calculated aqueous speciation of uranium on an Eh-pH diagram (Fig. 1). The dominant species is different at different pH and Eh values (species activities are equal along the red lines between species dominance fields). Eh is a measure of the tendency of electrons to flow from one ion to another[3][4] while pH is an indicator of how acidic or basic the groundwater is. The aqueous speciation is also different when other components involved in speciation reactions have different activities (e.g., calcium and fugacity of CO2 in equilibrium with the system). 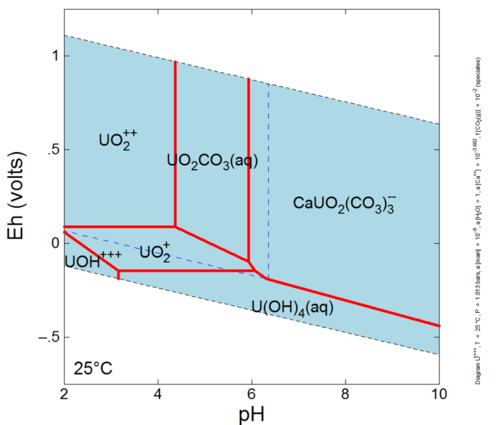 Speciation affects adsorption of a metal because different species are adsorbed to different degrees by aquifer minerals. This is because the charge and hydrated radii on aqueous species differs and these properties are important influences on adsorption. Aqueous speciation affects precipitation because the solubility of a mineral is defined by a single species. For example, if the solubility of the mineral anglesite is defined by the ion Pb+2, but Pb+2, is only a minor species in the aqueous speciation of lead, then the real solubility will be higher than that calculated from the “relation”:

Where Ksp is the solubility product constant, or the equilibrium constant for solid substance dissolving in an aqueous solution and “a” is the activity, or effective concentration, of each one of the different species in the reaction.

Oxidation-reduction chemistry plays an important role in aqueous speciation of certain metals such as arsenic (As), chromium (Cr), copper (Cu), mercury (Hg), selenium (Se), and uranium (U). These contaminants can exist in more than one oxidation state over the range of conditions found in contaminated groundwater. A change in oxidation state can profoundly change the adsorption behavior and solubility of a metal or metalloid (e.g., see the two chromium species in Figure 2 in MNA of Metal and Metalloid Contaminants). Reactions that change the oxidation state of metals are often kinetically limited, but can be catalyzed by microbial interactions[11][12]. Thus, for metals that are sensitive to oxidation-reduction potential, it is important to consider microbial activity and potential interactions with the contaminants when assessing mobility.

Adsorption can be defined as the partitioning of a constituent to the surface of an aquifer solid phase as a 2-dimensional “coating”[13]. For aqueous species carrying an electrical charge, partitioning is driven by electrostatic attraction and then potential bonding of the constituent to the surface of the solid. Uncharged (neutral) species may adsorb onto aquifer solid surfaces because they are repulsed, driven out of the aqueous phase, by energetically more favorable attraction of water molecules to each other. The surface of most aquifer minerals carries an electrical charge that varies with pH. For oxides and silicates, the charge is mostly the result of partially-bonded oxygen atoms at the surface. The resulting negative charge attracts positively charged ions. One of the most common and energetically favorable ions available to bond with the surface oxygens is the hydrogen ion. Hence, as pH of groundwater decreases and hydrogen ions are more abundant, more hydrogen ions approach surface oxygens, neutralizing the negative charge (Fig. 2). The pH at which all charge has been neutralized is called the zero point of charge (ZPC). At pH values below the ZPC, the mineral surface becomes positively charged. This variable surface charge behavior of aquifer minerals is an important control on adsorption of metal and metalloid contaminants. Those contaminants that exist in groundwater primarily as cations tend to adsorb more strongly as pH increases. Those that exist primarily as anions tend to adsorb more strongly as pH decreases. 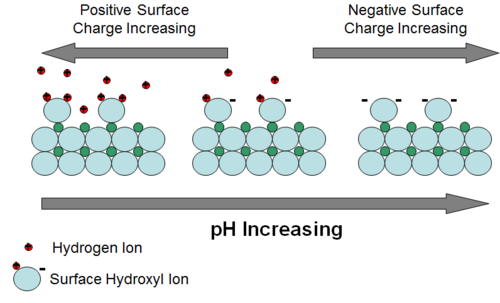 The capacity of aquifer solids to exchange cations or anions can be measured using standardized methods. These are good indicators of whether an aquifer can accommodate sufficient adsorption of contaminant metals. It must be remembered, however, that the measurements are made under a specific set of conditions. Adsorption may be less or more under the conditions of the contaminated aquifer. The effect of cation exchange capacity on the mobility of several metals is incorporated in the scenarios system for evaluating MNA for inorganics[1].

Precipitation of contaminant metals can be an effective attenuation mechanism. Precipitation differs from adsorption in that the contaminant is bound in a 3-dimensional structure of a mineral or an amorphous precursor to a mineral. The mineral can be composed of the contaminant bound to counterions from the groundwater. For example, lead can combine with the sulfate ion and form the mineral anglesite (PbSO4) by the reaction:

The equilibrium constant of this reaction, often referred to as the Ksp (solubility product)[21] is defined as:

where ai is the activity, or effective concentration, of the species i. When the product of the aPb+2 and aSO4-2 equals the Ksp, the groundwater is said to be saturated with anglesite. If the product exceeds the Ksp then it is thermodynamically favorable for anglesite to precipitate. Note that the Ksp refers specifically to the Pb+2 ion and the SO4-2 ion. Lead in other dissolved species such as PbCl2o, PbCO3o, or even PbSO4o is not considered. Hence, the aqueous speciation of a metal is important in controlling whether or not it will precipitate from groundwater. The measurement of the concentrations of lead and sulfate in groundwater provides the total dissolved concentration of each constituent that may be distributed among many species. Precipitation of minerals in aquifers is discussed in most aqueous geochemistry textbooks (e.g.[1][2][3]).

Microbial reactions can also affect the mobility of metals and metalloids by causing them to precipitate from groundwater[12]. Under strongly reducing conditions microbes catalyze the reduction of sulfate to sulfide. Metals such as zinc (Zn), lead (Pb), nickel (Ni), and cadmium (Cd), as well as redox sensitive arsenic (As) copper (Cu), and mercury (Hg), will readily precipitate as sulfide minerals[22]. Such reducing conditions are generally caused by a series of microbial reactions that deplete the system of oxidants such as oxygen, nitrate, and ferric iron. For other metals, like chromium (Cr) and uranium (U), the reducing conditions caused by microbes changes the oxidized and mobile forms (Cr(VI) and U(VI)) into reduced forms (Cr(III) and (UIV)) that precipitate as hydroxides or oxides.

Simple Guide to Mobility of Metals in Groundwater

All concepts described above were incorporated into a “scenarios approach” guidance document[1] to help groundwater professionals to evaluate the mobility of several metals and inorganics (Fig. 2 in MNA of Metal and Metalloid Contaminants). It shows how three primary factors (oxidation/reduction potential (ORP); cation exchange capacity (CEC), and sediment iron oxide coatings and solids), combine with three secondary factors (pH, sulfur/sulfide, and total dissolved solids) to provide a semi-qualitative indicator of mobility.