The REMChlor model employs an analytical mass balance source function that accounts for partial or complete source remediation at any time. A time-dependent source model is coupled to the plume model (Fig. 1). 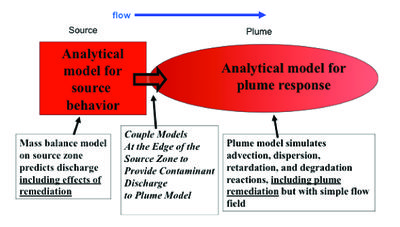 REMChlor allows for spatially and temporally variable contaminant decay rates in the plume. These decay rates can be user manipulated to simulate plume remediation activities or natural attenuation. Figure 2 shows an example of a plume remediation scheme that could be simulated in REMChlor. 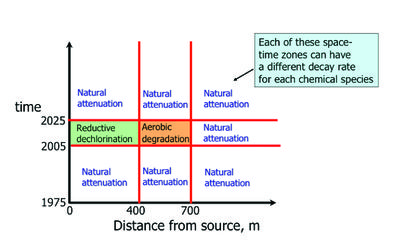 Figure 2. Example “time and space” plume remediation scheme for chlorinated solvents in the REMChlor model that enhances reductive dechlorination from 2005 to 2025 between 0 and 400 m and enhances aerobic degradation from 400 to 700 m (from Falta 2008[1]).

Plume response to remediation depends on characteristics of both the source and the plume behavior. Some plumes may persist long after source remediation, while others may attenuate without any source or plume remediation.

The following REMChlor modeling example illustrates one type of plume behavior than can occur with a persistent dense non-aqueous phase liquids (DNAPL) source (from Falta and Kueper 2014[6]). In this example, it is assumed that 200 kg of 1,2-DCA was released into a aquifer in 1980. The groundwater pore velocity (the Darcy velocity divided by soil porosity, sometimes called groundwater seepage velocity) is 60 m/yr, the initial source concentration is 1 mg/L, the retardation factor is 2, and the natural attenuation decay rate in the plume corresponds to a half-life of 2 years. The time-dependent source concentration is assumed to be a linear function of the source mass. The top panel in Figure 3 shows the dissolved 1,2-DCA plume in 2008, 28 years after the initial release.

Enhanced plume remediation was simulated between 2010 and 2020 by increasing the 1,2-DCA decay rate over the first 300 m to correspond to a half-life of 0.5 year. This remediation has the effect of greatly shrinking the plume (2020 panel, Fig. 3), but the plume almost completely rebounds after the plume treatment ends (2040 panel, Fig. 3). The plume rebound in this case was due to the fact that the 1,2-DCA source strength remains high due to the low rate of source depletion in this scenario. 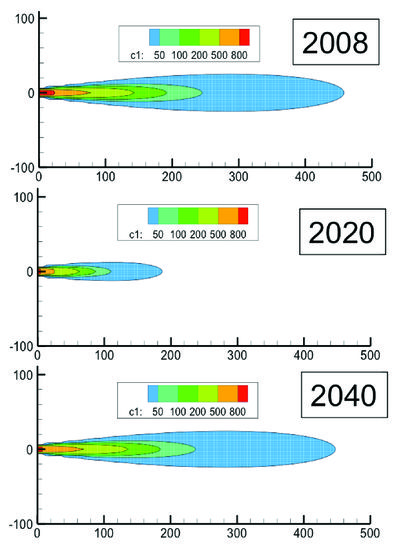 Figure 3. Simulated 1,2-DCA plume following a release in 1980. Plume remediation occurred between 2010 and 2020 (reproduced with permission from ©2014 Springer[6]), and then the plume rebounded because the source was not remediated. Units are μg/L. 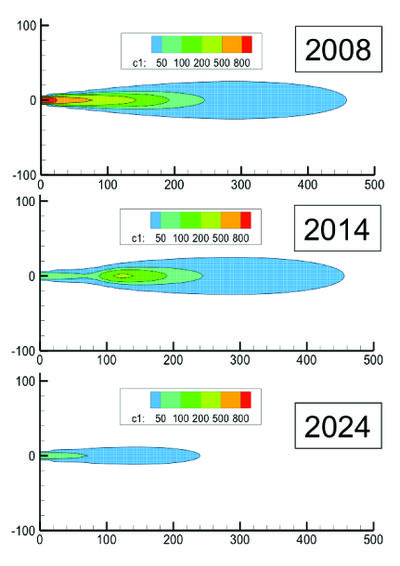 Numerical plume models solve the groundwater flow and contaminant transport equations. These two processes are typically decoupled, and solved separately. A good example of such a decoupled flow and transport model is the MODFLOW[7] and MT3DMS[8] combination. A groundwater transport simulation is performed by first calculating the transient or steady-state groundwater flow field using MODFLOW. Then the MT3DMS transport simulation is run using the flow field from MODFLOW. This approach works well as long as the contaminant transport does not affect the flow field. For problems where contaminant concentrations cause buoyancy effects (e.g., salt water intrusion), the equations must be coupled together and solved simultaneously. Other widely used plume models include:

Numerical plume models may be used with either a numerical or an analytical source zone model. The coupling of a numerical flow and transport model with a numerical source zone model is fairly complex, and has been done mainly in a research setting (e.g., [12][13][14][15][16]). More typically, numerical plume models are run in one of two ways: 1) a constant source term is assumed where concentration does not change over time; or 2) the a simpler analytical source model is run outside of the numerical model and source concentration vs. time data over many years are then entered into the numerical model to simulate source attenuation[3]. One new modeling tool is the MODFLOW-USG groundwater flow model, where USG stands for “unstructured grids”[17][18]. Unstructured grids allow for inclusion of various cell geometries and grid-nesting methodologies to provide finer resolution of complex stratigraphy and other hydrologic features. This model is emerging as the standard for modeling groundwater flow, and can be used with the MODPATH Version 7[19] to simulate groundwater plumes using particle tracking. A solute transport model, USG-Transport, is currently being beta tested on the Groundwater Vistas platform in 2016.

Plume response to source remediation can be simulated using analytical or numerical approaches. Analytical models are easy to set up and run, but they assume simplified flow conditions that may not be realistic at some sites. These models are most appropriate for screening-level calculations and for simple sites. Numerical models take more effort to set up and run, but they have the flexibility to simulate complicated flow fields, and transient flow effects such as groundwater pumping. However, most numerical models do not simulate source attenuation directly and other models are needed to simulate plume response to changes in the source over time. Matrix diffusion may play a significant role at some sites, and newer analytical and numerical approaches are available for simulating this mechanism in plume response modeling.