N-Nitrosodimethylamine (NDMA) is a suspected human carcinogen that can enter water supplies from some military and industrial sources. NDMA is mobile in water, does not strongly sorb to solids or volatilize, and does not easily biodegrade. However, recent work has shown that NDMA can be effectively treated in both above ground and in situ cometabolic biological treatment systems. 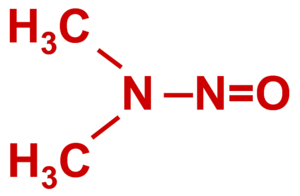 N-Nitrosodimethylamine (NDMA) is a suspected human carcinogen that has traditionally been detected in specific food products, such as cured meats (e.g., cold cuts preserved with nitrite), smoked fish, and some cheeses as well as chewing and smoking tobacco. NDMA is not commercially manufactured, but potential industrial sources include byproducts from rubber tire manufacturing, tanneries, some pesticide and dye plants, and fish processing facilities. NDMA has also been detected in groundwater at several military and aerospace sites involved in the production, testing, and/or disposal of liquid rocket propellants formulated with 1,1-Dimethylhydrazine (1,1-DMH or UDMH). It is also frequently reported at ng/L concentrations in water and wastewater that has been disinfected with chloramine[2].

No Federal Maximum Contaminant Level (MCL) has been promulgated for NDMA in drinking water because it was historically thought to be an issue associated primarily with foods and tobacco, but NDMA and other nitrosamines were added by USEPA to both the Unregulated Contaminant Monitoring Rule-2 (UCMR-2) and Contaminant Candidate List-3 (CCL3). UCMR-2 requires many large water utilities to sample for the compound, and CCL3 provides a potential basis for contaminant regulation under the | Safe Drinking Water Act (SDWA) based on occurrence and potential risk to the public.

Among the states, California has established a public health goal of 3 ng/L and Massachusetts has set a regulatory standard of 10 ng/L in drinking water. These stringent requirements reflect the carcinogenicity of NDMA which, based on USEPA risk assessments, poses an increased cancer risk of one cancer per million at a drinking water concentration of only 0.7 ng/L[3]. 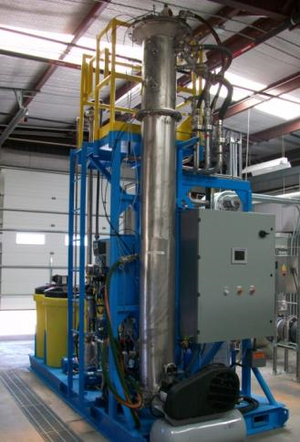 NDMA, in its pure form, is a yellow liquid with a density of 1.0059 g/ml and molecular weight of 74.1 g/mol[3]. It is miscible in water, relatively non-volatile and sorbs poorly to organic carbon, allowing it to readily migrate with groundwater. While NDMA is susceptible to photolysis, it is relatively recalcitrant in groundwater under both oxic and anoxic conditions, and forms large plumes at sites with concentrated sources (e.g., rocket motor test sites). 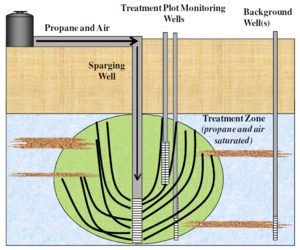 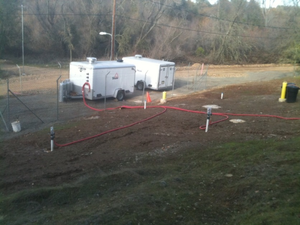 NDMA is typically removed from groundwater by extracting the contaminated groundwater followed by surface treatment with ultraviolet radiation (UV). NDMA decomposes in UV light in the 225 - 250 nm wavelength range. The primary products are dimethylamine and nitrite[4]. UV treatment can reduce NDMA concentrations to low ng/L levels, but is expensive due to the high energy input required. In potable water treatment systems, the UV dosage for NDMA removal can be a factor of ten greater than the dosage required to achieve equivalent virus removal[2].

Cometabolic biological treatment is an emerging technology for above ground and in situ treatment of NDMA. A variety of propane-oxidizing bacteria (propanotrophs) are capable of degrading NDMA[5][6][7]. When fed propane, these organisms produce a broad specificity monooxygenase enzyme (propane monooxygenase; PrMO) that cometabolically transforms NDMA producing methylamine, nitric oxide, nitrite, nitrate, and formate. A major advantage of cometabolic degradation is that the microorganisms grow on the primary substrate (propane) allowing NDMA to be reduced to ultra-low concentrations. For example, the bacterium Rhodococcus ruber ENV425 degraded NDMA from concentrations as high as 80 μg/L to < 10 ng/L in batch culture[6], and in a membrane bioreactor[8]. A mixed culture grown on propane also degraded NDMA to < 10 ng/L[7].

At a former rocket test site, a BFBR was operated at a fluidization flow of ~ 9 liters per minute (LPM) and received propane, oxygen, and inorganic nutrients in the feed, along with an influent concentration of ~1,000 ng/L NDMA (Fig. 2). At an average hydraulic residence time (HRT) of 10 min, NDMA was reduced to less than 10 ng/L. At a 20 min HRT, NDMA was reduced to below the site discharge limit of 4.2 ng/L. The BFBR system is highly resilient to upsets by trace co-contaminants such as trichloroethene (TCE) and Freon 11[9].

In situ propane amendment (Fig. 3) was also effective for treating NDMA in groundwater at the Aerojet Superfund Site in Rancho Cordova, CA. The propane biosparging demonstration (Fig. 4) was conducted downgradient of the liquid rocket engine test area where NDMA concentrations in groundwater ranged from 2,000 to 30,000 ng/L. The propane and air biosparging system removed 99.7 % to > 99.9 % of the initial NDMA to levels as low 3 ng/L. Propane biosparging systems are expected to be less expensive to install and operate than conventional pump-and-treat systems[1].

N-Nitrosodimethylamine (NDMA) is a suspected human carcinogen often found in tobacco and in certain foods including cured meats, smoked fish and some cheeses. While not commercially manufactured, NDMA can occur when water is disinfected with chloramine or from industrial and military sources. NDMA does not readily volatilize, sorb to solid material, or biodegrade so it is mobile in groundwater. While NDMA can be degraded to low levels with ultraviolet radiation (UV), energy costs are high. Cometabolic biological treatment is an emerging technology that has been demonstrated to be effective for both above ground and in situ treatment of NDMA.