Composting is an ex situ technology designed to treat excavated soils impacted by a range of recalcitrant contaminants, including nitroaromatic and nitramine explosive compounds. The process involves mixing contaminated soil with bulking agents such as wood chips, straw, hay or alfalfa, and organic amendments such as cattle and/or chicken manure, or other vegetative wastes.

The selection of specific compost ingredients depends on the contaminants to be treated, the physical/chemical characteristics of the soil, and the availability of low-cost organic amendments. The goal is to achieve the desired bulk density, porosity, and organic amendments that can provide the proper balance of carbon and nitrogen (C/N ratio) to promote biological activity in the compost. For most composting applications, it is necessary to provide amendments that will support mesophilic or thermophilic microbial activity[2].

Composting is a biological remediation technology that exploits the activity of a diverse range of microorganisms to degrade target contaminants. The biological activity is enhanced through the addition of readily degradable amendments to provide a sufficient supply of nutrients. As biological activity increases, compost temperatures reach mesophilic (<45°C) and potentially thermophilic (45° to 80°C) conditions, the latter of which experiences the greatest degradation[3].

Turning, mixing, and/or aeration of the compost provides oxygen for extracellular hydrolysis and aerobic catabolic reactions to take place. However, a high level of microbial activity can deplete oxygen between turning or aeration sequences, creating anoxic conditions in portions of the compost material that allow anaerobic catabolic reactions to occur.

The initial proof of concept and scale up from laboratory to pilot scale tests for composting explosives contaminated soils and lagoon sediments began in the 1980s. Early data had promising degradation results (92% to 97%) for a range of explosives including TNT, RDX, HMX, and tetryl, but soil loading rates were low, generally 10% or less in the compost mixtures[4][5]. 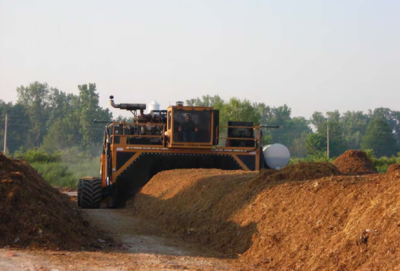 The primary advantages associated with windrow composting include:

The primary limitations associated with composting include:

Factors that drive the cost of composting include: