Landfarming is a well proven ex-situ bioremediation technology that has been successfully used since the 1980s for treating petroleum impacted soils/sediments, drill cuttings, low brine drilling fluids, oily sludges, tank bottoms and pit sludges. The material to be treated is incorporated into surface soil. Naturally occurring microbes in the soil and waste material transform the organic contaminants to carbon dioxide, water and biomass ([1][2][3]). Maintaining optimum soil conditions for rapid biodegradation of organic contaminants can help meet cleanup goals within a reasonable timeframe.

During landfarming, the waste materials are typically placed as a layer on the ground surface with variable thickness. The waste is then tilled and amended with nutrients to enhance biodegradation by naturally occurring bacteria (Figure 1). Fertilizers such as urea and triple superphosphate (TSP) are used to provide nitrogen and phosphate necessary for biodegradation. Reduction in hydrocarbon concentrations can be expected within a span of weeks to months, depending on the initial concentration and composition of hydrocarbons, and whether the soil conditions are optimized for biodegradation. Once cleanup goals have been achieved, the treated material can be i) re-used in construction activity such as berms, landfill cover, backfill, regrading, or for agricultural purposes, ii) disposed at a landfill and/or iii) left in place and revegetated, depending on local regulations or site-specific considerations.

Landfarming is a low-cost technology. Facilities are simple to construct and easy to operate. Standard construction and farming equipment can be used to move soils to the land treatment facility, to amend the soils with fertilizer, to apply water to the soils and to till the soils (e.g. excavator, plow, rotovator, water truck). Figures 2 through 4 show examples of equipment used at a typical landfarming facility.

Figure 4. Rotovator and Plows to Till Soils

Some of the disadvantages of the technology are:

Suitability of Wastes for Landfarming

Wastes may not be suitable for landfarming for a number of reasons:

The initial concentration and composition of hydrocarbons strongly influences the biodegradation potential of a waste. 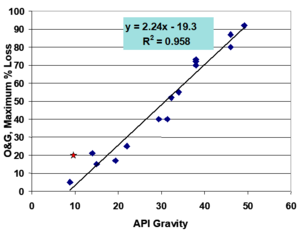 Figure 5. Correlation between API gravity (specific weight of the crude) and the predicted extent of biodegradation as measured by oil and grease (O&G)[5].

This same correlation can be used to determine the maximum initial hydrocarbon concentration that can be treated using conventional landfarming within 4 weeks and/or the maximum endpoint achievable for a given waste material.

Using analytical methods such as gas chromatography to determine the quantity and composition of organic contaminants in a waste may be useful in determining biodegradation potential. Lighter ends (lower boiling point components that elute earlier in the chromatogram) will typically degrade faster than heavier end components. 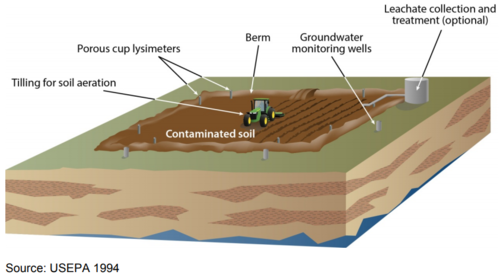 Successful landfarm operation requires maintaining optimum conditions in the soil/waste materials (moisture, oxygen, pH and nutrient levels) to enhance biodegradation of petroleum hydrocarbons (see Table 1). Before beginning landfarm operations, the waste and the soil at the landfarm site should be characterized to establish the soil baseline characteristics and the need for soil additives such as agricultural lime for pH correction.

Maintaining optimum conditions for biodegradation is the key to achieving target cleanup goals within a reasonable timeframe. Figure 8 is an illustration of the effect of tilling and adding fertilizer on the rate of degradation of petroleum hydrocarbons. 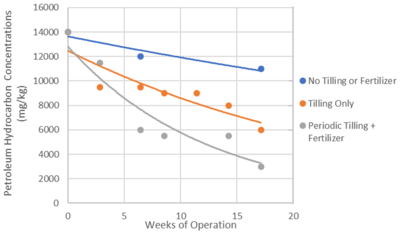 Cleanup levels that can be attained

Landfarming has been successful in meeting cleanup goals for a variety of hydrocarbon impacted wastes within a reasonable timeframe (see Figure 9). It is important to note that reductions in concentrations of total petroleum hydrocarbons (TPH) that are greater than 95% of the original concentrations are difficult to achieve. It is also difficult to achieve a final concentration of TPH that is <0.1% of the dry weight of the soil. Cleanup goals for soils impacted with refined products such as gasoline may be lower than cleanup goals for crude oil based on risk to receptors and mobility of those products in the environment. 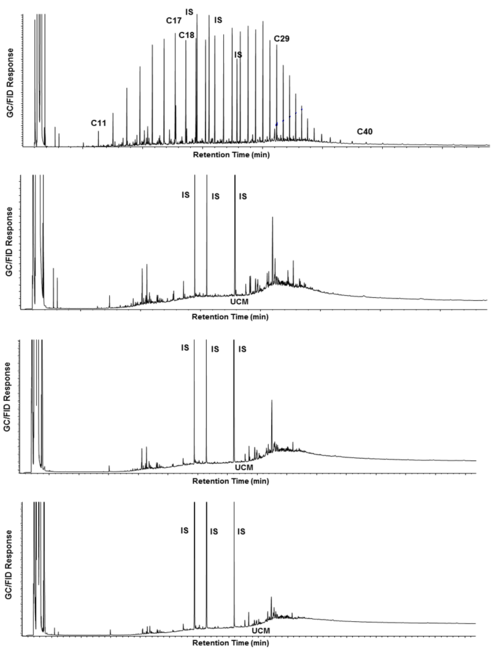